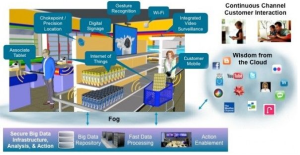 The Internet of Things (IoT) is an increasingly talked about topic in all sectors – particularly in retail. It’s a concept that not only has the potential to impact how the retail sector sells products, but how consumers buy them.

The majority of US retailers strongly believe that IoT will drastically change the way companies do business in the next three years. According to McKinsey Global Analysis Institute research, IoT in the retail environment – where consumers engage in commerce – has the potential to be the 4th largest ‘setting’ – despite significant uncertainty about the rate of adoption by consumers.

Another recent study reveals that consumers appear to be ready with adoption of IoT devices expected to rise quickly with nearly two-thirds of consumers intending to purchase a connected home device by 2019, while ownership of wearable technology is expected to double year-on-year in 2016, with an estimated $2bn being spent on IoT in the next few years.

So what does IoT mean for retail in 2016 and what are the key areas we can expect to see affected?

ZARA has led the way with a new look at the role RFID (Radio Frequency ID) tags could play in their business model. They started this journey three years ago and by the end of 2016 will have rolled out an end-to-end RFID platform. Key to this was allowing the RFID tags to be embedded in the security tags, which allow them to be reused. These tags offer benefits in in-store workflow, improvements in accuracy and reduction in the time taken to do stock counts – the business case is compelling.

Companies are deploying fully automated, reduced-line stores. They can be put into retail areas and achieve targeted penetration in a low-cost way, while reducing risk.

By allowing for monitoring of stock levels, smart packaging will now allow fridges or pantries to order new goods when stock runs low.

It’s easy to see why IoT is such a hot topic at present. Although there are real challenges involved, such as privacy and security, as well as the necessity for agility and innovation and seamless connectivity, IoT opens doors to many opportunities. The new rule for the future seems to be that whatever can be connected, will be.

The business case for IoT for retailers lies in connecting with their customers in new and relevant ways, as well as driving efficiencies in their supply chains. We are already seeing pilots in South Africa with connected ‘smart’ sensors in store and planogram ‘robots’ to manage consistent instore execution. Local retailers are forging new relationships with smart, innovative partners who will accompany them on their journey.

This article originally appeared in Bizcommunity